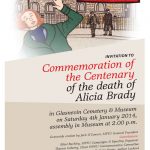 The centenary of the funeral of Alicia Brady (1897-1913) was commemorated in Glasnevin Cemetery, Dublin, on Saturday, 4 January, at 2.00 p.m.  A member of the Irish Women Workers’ Union, Alicia was among the last people to die as a result of the social conflict surrounding the 1913 Lockout, after being hit by a ricochet from a revolver fired by a strike-breaker in December 1913.

Before the commemoration, Padraig Yeates remarked that ‘this event will be one of the last commemorations of the 1913 Lockout Centenary. Alicia died from tetanus which she contracted after being hit by a ricochet from a revolver fired by a strike-breaker on 18th December during a confrontation in Mark Street, Dublin. Alicia was a 16 year old worker in Jacob’s Biscuits factory who was locked out with over 300 other women and 600 men, because of their stand in support of workers on strike at the Dublin United Tramway Company which was owned by William Martin Murphy. Thousands attended her funeral on January 4th, 1914, where orations were delivered by Jim Larkin and James Connolly. In his graveside oration Connolly said, ‘Every scab and every employer of scab labour in Dublin is morally responsible for the death of the young girl we have just buried’.’

The event was organised by the 1913 Committee, SIPTU Campaigns and Equality Department and the Glasnevin Trust.

From Century Ireland: the death of ‘Alice’ Brady.

To watch a report on the commemoration, click here.