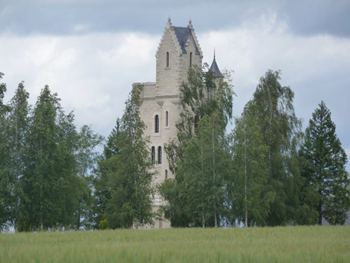 A ceremony was conducted in the grounds of the Ulster Tower at Thiepval to mark the 97th anniversary of the Battle of the Somme.

The Ulster Tower is a memorial both to the Irish of the Battle of the Somme and to all Ulstermen who died in the Great War, on the Somme battlefields. It was built in 1921, and it is an exact replica of a tower near the 36th (Ulster) Division’s training ground in Belfast, known as Helen’s Tower.

The Ulster Tower is located on what was the German front line during the Battle of the Somme, facing Thiepval Wood, the site from which the 36th (Ulster) Division made its charge on 1 July, the first day of the Somme offensive. Today, the site offers guided tours of the woods from its visitor centre. Inside the tower, visitors can view the plaques dedicated to the Irish soldiers, several paintings and visit its memorial chapel.

From History Ireland: Timothy Bowman on the Irish at the Somme.

From BBC History: The battle of the Somme.

Find out more or adjust your settings.