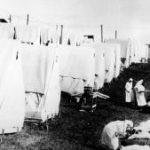 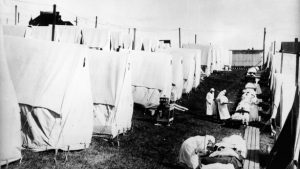 The global influenza pandemic of 1918-19 – the so-called ‘Spanish flu’ – killed as many as 50 million worldwide. The huge mobilisation and demobilisation of troops before and after the end of the First World War seems to have spread it across the globe, and, having been first recorded in Belfast in June 1918, the flu arrived in Ireland in successive waves from the summer of 1918 onwards. The latest estimates, by Ida Milne, suggest that perhaps as many as 800,000 people in Ireland were infected (one in five of the Irish population), and over 20,000 died. This makes the pandemic one of the greatest killers of the ‘Decade of Centenaries’, albeit one that is often overlooked.

The centenary of the pandemic in Ireland cannot be distilled into one single event, but it is being examined in 2018.  An overview of the global pandemic can be found in the International Encyclopedia of the First World War. An overview of its impact on Ireland by Guy Beiner, Patricia Marsh and Ida Milne can be found in this article from History Ireland (and the authors also participated in a History Ireland Hedge School on the pandemic, recorded earlier this year). RTÉ have provided this short ‘explainer’ video on the ‘Spanish flu’, while BBC Radio Four recently produced a documentary on the pandemic that incorporates an Irish element; listen back to it here.

The History Show on RTÉ Radio One recently hosted a discussion on the pandemic; listen back here.

Finally, the National Museum of Ireland – Country Life have developed an exhibition on the flu in their Mayo campus, with an associated national outreach programme; full details of both can be found here.