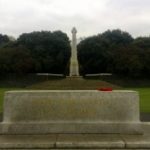 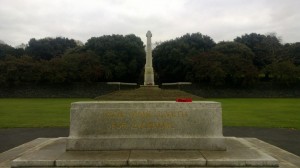 11 November 2018 marks the centenary of the armistice that finally brought the First World War to an end. Since 2014 the war has loomed large in the commemorative centenary calendar in both Ireland and the UK, and its end is being marked by a wide range of events and initiatives. This post, which will be updated throughout the week leading up to 11 November, is intended to serve as a guide to commemorative events that will be taking place in November, and resources with which to learn more about the end of the First World War. A sense of the realities of Irish life in November 1918 is given by this Century Ireland piece on Ireland and the end of the First World War, one of a number of specially commissioned articles on the conclusion of the war and its aftermath. The armistice is also being marked are a number of imaginative installations, such as Fallen in St Patrick’s Cathedral, The haunting soldier in Dublin’s St Stephen’s Green, and the planned Pages of the sea project at Dunree in Co. Donegal.

RTÉ is devoting considerable coverage to the centenary on TV and radio, details of which can be found here. There are also a number of specially commissioned articles and reports available on the RTÉ website. The current issue of History Ireland also devotes a good deal of space to the end of the war, and its aftermath.

A wide variety of events – commemorations, exhibitions, lectures, seminars, services – are scheduled to commemorate the end of the war across Ireland; explore our listings for armistice centenary events here. Readers are also encouraged to check with local churches as appropriate for details of any religious services to mark the centenary.

Finally, the understandable emphasis on the First World War in November 2018 is a reason to highlight online resources available for those who wish to learn more about the wider war. Listings of the Irish dead of the war can be found on Ireland’s memorial records, while the Commonwealth War Graves Commission provides details of those interred in cemeteries and recorded on war memorials.

The context of the conflict can be explored via resources such as the International Encyclopedia of the First World War; a very useful selection of World War One resources is also available online from the British Library. The digitised collections of Europeana 1914-1918 offer access to primary sources on the war from across the continent, while a distinct Irish perspective is provided by the online exhibitions developed by the National Library of Ireland and RTÉ, along the with the Trinity College Dublin exhibition Fit as fiddles and hard as nails: Irish soldiers voices from the Great War.