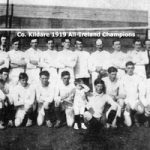 Children’s Football Blitz as part of the Co. Kildare Decade of Commemorations programme and Heritage Week. 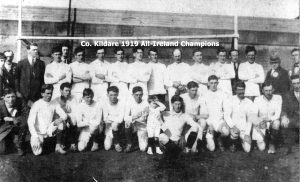 Co. Kildare GAA and the Kildare County Council Decade of Commemorations will mark the 100th anniversary of Co. Kildare’s victory on 28 September 1919 against Galway (2-5 to 0-1) with a Children’s Football Blitz.

As part of the event the young footballers, dressed in white, will form the figures 1919 on the pitch which will captured on drone footage.

We are also calling on the descendants of the 1919 players and officials to come forward with stories, photos, medals, etc. We want to commemorate the men who took part in this historic event.