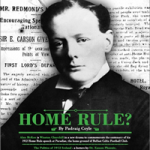 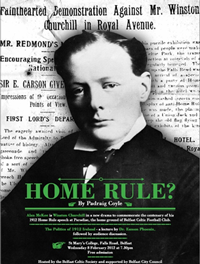 The Belfast Celtic Society staged an event – “Winston for Paradise,” which took place at St Mary’s University College on the hundredth anniversary of Winston Churchill’s speech in favour of Home Rule in Belfast. Organised by the Belfast Celtic Society, a special dramatic production, Home Rule, saw local actor Alan McKee deliver the speech made by the then Liberal MP at Celtic Park on the Donegall Road, the home ground of Belfast Celtic FC.

The original venue was the Ulster Hall, but Celtic Park had to be used because unionists in Belfast had bolted the doors of the hall to local Liberals who had brought Churchill, the First Lord of the Admiralty, to promote the cause of Irish Home Rule.

At the event, Dr. Eamon Phoenix spoke on the political turmoil the city was facing at the time, as the Titanic prepared to slip into history and European slaughter loomed on the horizon.