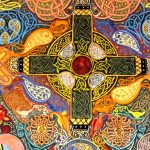 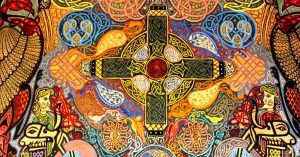 As part of the ongoing Decade of Centenaries, dlr Libraries and dlr Heritage Office plan to celebrate the centenary of the Dominican Oratory of the Sacred Heart (located along Library Road, Dún Laoghaire) with an exhibition in dlr LexIcon and accompanying publication. Created to mark the end of the First World War and to commemorate the many local men who had fought and died on the Western Front, the Oratory, built in 1919, was hand-painted by Sister M. Concepta Lynch between the years 1920-36. The result is regarded masterpiece of the Gaelic Revival style. The windows were provided by the Harry Clarke Studio in Dublin. An Cathaoirleach of dlr County Council, Cllr Ossian Smyth observed that ‘I am delighted to hear that the centenary of the Oratory will be commemorated in a special way in 2019. It will add enormously to the historical and social record of Dún Laoghaire. We hope to highlight this wonderful gem in the heart of our community, attracting more and more people to see this remarkable Oratory for themselves’.

dlr Heritage Office would like to hear from anyone who might have personal stories or connections with the Oratory. Any members of the public with information, reminiscences, photos or memorabilia relating to the history of the Oratory should email dlr Local Studies Librarian, Nigel Curtin, at localhistory@dlrcoco.ie.