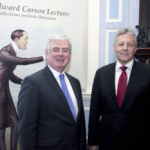 The lecture, entitled ‘Reflections on Irish Unionism’, was delivered to an invited audience representing a broad range of political views and key individuals involved in preparations for the decade of commemorations. The lecture was preceded by a panel discussion between Prof. Paul Bew and Prof. Michael Laffan, moderated by Dr. John Bowman, on the legacy of Edward Carson. In cooperation with RTE, the lecture was also broadcast on RTE Radio One that night at 10pm.

The lecture was the first in a series focusing on some of the key anniversaries arising in the course of the coming decade. The launch of the lecture series preceded the centenaries of three significant events in our history: the first mass demonstration against Home Rule at Balmoral on 9 April, the introduction of the Third Home Rule Bill on 11 April, and the sinking of the Titanic on 15 April.

The Tánaiste said ‘it is particularly fitting that the First Minister has agreed to deliver the address for the first major commemorative event organised by the Government this year.’

‘The First Minister will have very insightful and interesting points to make, both in relation to the legacy of Edward Carson and the history of Irish Unionism more broadly, and on his own personal political journey over the past decades. His participation is a testament to the importance both the Irish Government and the Northern Ireland Executive attach to a joint approach to commemorative activities.’

‘The lecture will take place in Iveagh House, only a few hundred feet from Carson’s birthplace on Harcourt Street. We should not forget that Carson was a Dubliner, that he was a fellow student of Oscar Wilde in Trinity College Dublin, and that he first made his reputation practising at the Irish Bar. Neither should we forget the rich political tradition of Southern Unionism, which both Carson and Lord Iveagh in their separate ways, represent. This lecture, and future commemorative events, will provide valuable opportunities to look again at these often overlooked aspects of our shared history’.