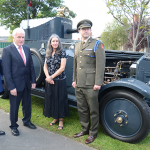 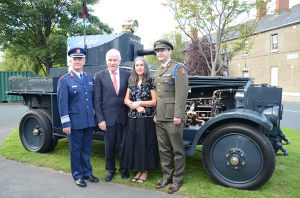 On 7 August 2012 Jimmy Deenihan TD, Minister for Arts, Heritage and the Gaeltacht, launched the Bureau of Military History website at Cathal Brugha Barracks in Dublin. This project was undertaken by the Defence Forces Military Archives,in collaboration with the National Archives (Department of Arts, Heritage and the Gaeltacht) and the Department of Defence. The project involved the digitisation of over 35,000 pages, 42 sets of photographs and 13 voice recordings from primary sources covering the revolutionary period in Ireland from 1913 to 1921.

Speaking at the launch, Minister Deenihan said ‘this launch is the culmination of years of work by the Military and National Archives. When established, the Military Bureau’s official brief was “to assemble and co-ordinate material to form the basis for the compilation of the history of the movement for Independence from the formation of the Irish Volunteers on 25th November 1913, to the 11th July 1921.” Anyone who sees these collections online will have to agree that they accomplished this goal with distinction’.

‘The records held within this collection cover almost the entire duration of the Decade of Commemorations, providing primary source material for the revolutionary period in Ireland from 1913 to 1921. The Bureau of Military History website will make a significant contribution to the goals of the Decade of Commemorations by encouraging scholarly and original research on the momentous events of this period in our history both nationally and internationally’.

‘This website also brings these important records to a whole new audience. As the use of the internet at home continues to grow as the medium of choice for research, this project will encourage greater access to these records thereby enhancing our understanding and appreciation of the sacrifice made during these formative years of our state’, concluded Minister Deenihan.

The Bureau of Military History Collection, 1913-1921 (BMH) is a collection of 1,773 witness statements; 334 sets of contemporary documents; 42 sets of photographs and 13 voice recordings that were collected by the State between 1947 and 1957, in order to gather primary source material for the revolutionary period in Ireland from 1913 to 1921.

Along with the other major collection at Military Archives covering the revolutionary period from 1913, the Military Service Pensions Collection, the Bureau is among the most important primary sources of information on this period available anywhere in the world.

The Bureau material was held in the Department of An Taoiseach for some forty-five years after the last statement was collected. In 2001, it was decided to transfer the Bureau to Military Archives and prepare it for release into the public domain. A team of archivists and support staff, under the direction of Commandant Victor Laing (former Officer in Charge of Military Archives) successfully prepared the collection for its launch in March 2003. A duplicate set of the statements had originally been prepared by the Bureau, and was transferred to the National Archives to allow for greater public access.

From History Ireland: An interview with Commandant Victor Laing.

From History Ireland: Fearghal McGarry on the Bureau of Military History and the Easter Rising.