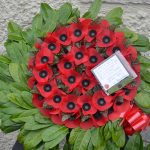 The Dublin Central Branch of the Royal British Legion celebrated a Remembrance Mass to honour the dead of the First World War, followed by a reception in the Dublin City Working Mens Club.

The Church of the Immaculate Heart of Mary on City Quay dates from 1861, and is dedicated to Ireland’s seafarers.

This Mass is celebrated annually on the Sunday closest to Armistice Day, 11 November. Detail of each year’s event are be posted on the Royal British Legion’s website.

Click here for further details on the Royal British Legion in Ireland.

Posted in 2012 events, Leinster, Past, World War One