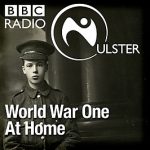 On 26 February 2014 BBC Radio Ulster began to broadcast a series of short documentaries entitled ‘World War One at Home’, detailing how the war affected the people and place of what was then the United Kingdom in 1914-18. A range of such series of were developed by the BBC in collaboration with the Imperial War Museum, to be broadcast on the BBC’s regional and local stations. The series detailing the impact of the war on Ireland contains documentaries on the Larne gun-running of July 1914, John Redmond’s Woodenbridge speech of September 1920, the imprisonment of German POW’s in Co. Tipperary, and the impact of the war on Dublin’s Guinness Brewery, amongst others.