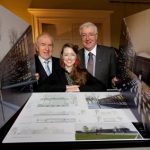 On 30 January 2014 Dublin-based O’Daly Architects were announced as the winners of an international architectural competition to design a Chapel to commemorate the 232 people who died in the 1916 Easter Week Rising and who were interred in Glasnevin Cemetery. 131 were buried in a mass grave on the site chosen for this chapel in the St. Paul’s cemetery area of Glasnevin Cemetery, while the remainder were interred in family graves throughout the cemetery.

The competition was organised by the Royal institute of the Architects of Ireland (RIAI) on behalf of the Glasnevin Trust. It is planned to have the project completed for, and officially opened, during the Easter 2016 Centenary celebrations.

Speaking at the announcement of the winners, Jimmy Deenihan, TD, Minister for Arts, Heritage and the Gaeltacht, remarked that ‘architecture is an important and enduring reflection of our society. I welcome the sustained commitment of Glasnevin Trust to ensure that their developments are characterised by high quality architecture. I look forward to seeing the 1916 Centenary Chapel project develop and progress over the coming months’.

The Judging Panel’s Citation on the winning entry stated that ‘this project imaginatively created a unique sense of place which is simultaneously one of peaceful contemplation, commemoration and celebration. The design strongly reinforces the notion that all religions, and all humanity, have in common a love of and affinity with nature. This has been achieved by the clever exploitation of sunlight and daylight, rich and complex inside/outside relationships and a sensitive use of materials. The response to natural phenomena and landscape together create a fitting tribute to the citizens of Dublin who perished in the 1916 Easter Rising’. 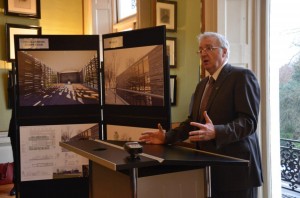 Commenting on the competition, John Green, Chairman of Glasnevin Trust, said that ‘in collaborating with the RIAI our ambition was that this architectural competition would produce a striking memorial to those people who lost their lives in the 1916 Easter Rising and were buried in Glasnevin, while creating a spiritual, contemplative and peaceful space in modern times for those who come to mourn and grieve for the recently deceased. The result, from our perspective, has been spectacularly successful, not just in the winner it has produced, but in the breadth and creativity of all entrants. Truly this process has already shown tremendous respect to those people whom we set out to commemorate’.

Speaking on behalf of O’Daly Architects, Emer O’Daly said that ‘the design for the Glasnevin 1916 Centenary Chapel creates a series of calming and contemplative spaces that are embedded in nature.  A garden of water pools and trees is formed around which the visitor journeys from walkway to memorial to Chapel space.  The interior of the Chapel is a play of light, water and stone, creating a space of transition from dark to light’.

The competition, launched last September, attracted 129 entries of a remarkably high standard, from architects throughout the world. The promoters and judging panel were extremely impressed by the quality of the schemes selected following a rigorous assessment process. The winning entry receives an award of €10,000.

The building cost of the project is estimated at between €3.0 and €3.5 million and will be funded partially by the Dublin Cemeteries Committee. In addition Government funding is being sought, and the committee has commenced fund raising activities through philanthropic sources.

An exhibition of the Glasnevin 1916 Centenary Chapel competition – winner, shortlist and all 128 entries – is now open in the RIAI, Mon-Fri, 9.30-17h.

To learn more about the Glasnevin Trust, click here.