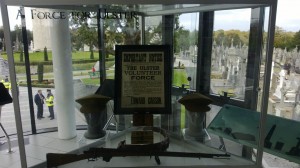 On 11 November 2013 Jimmy Deenihan T.D., Minister for Arts, Heritage and the Gaeltacht, attended the opening of an exhibition in Glasnevin Cemetery Museum entitled ‘The Third Home Rule Bill, 1912–1914: The Unionist Response’, organised by the Unionist Centenary Committee. The exhibition ran from 11 to 24 November. Three of the largest private collections of unionist artefacts and memorabilia of the period were displayed during the exhibition, including personal possessions of Sir James Craig, first Prime Minister of Northern Ireland, and his family. The majority of these artefacts had never been on view to the public before in the Republic of Ireland. The opening of the exhibition also incorporated a short dramatic performance about the Ulster Covenant of 1912 and the foundation of the Ulster Volunteer Force by Partisan Productions.

As 11 November is Armistice Day, an ecumemical service was held in memory of the Irish servicemen killed in both world wars. Minister Deenihan laid a wreath on behalf of the government at the Commonwealth War Graves memorial in Glasnevin Cemetery. Wreaths were also laid on behalf of the British, Canadian, French and German governments; the Commonwealth War Graves Commission; the Royal British Legion; the Glasnevin Trust; the Unionist Centenary Committee; the 36th (Ulster) Division Memorial Association; the Ancre Somme Association; the Confederation of Ulster Bands; the North Ulster Somme Association; the Last Post Great War Society; the Ulster Unionist Party; and other groups.

After the ceremony, Glasnevin Cemetery Museum hosted a lecture by Dr Edward Madigan of Royal Holloway, and formerly of the Commonwealth War Graves Commission, entitled ‘Ireland and the First World War: The challenges of commemoration’.

From History Ireland: Edward Madigan on commemoration during the 2011 Royal visit.

From History Ireland: Philip Orr on Ballymena during the Home Rule crisis.

From History Ireland: Brian Hanley on Armistice Day in Dublin during the 1920s and 1930s.