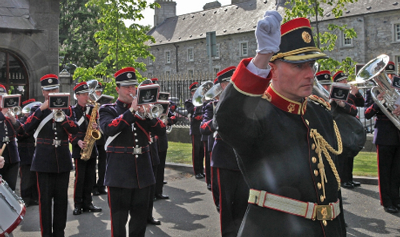 The Annual 1916 Commemoration Ceremony took place on Wednesday 8 May at the Church of the Most Sacred Heart, Arbour Hill, Dublin. It was attended by President Michael D. Higgins and An Taoiseach Enda Kenny TD, along with members of the government and the Defence Forces attended. The Church of Ireland Archibishop of Dublin, the Most Revd Dr Michael Jackson. This was the first time a Church of Ireland Archbishop had delivered an address at the annual event.

The Archbishop preached at the mass in the Church of the Most Sacred Heart in Arbour Hill. The service was followed by a ceremony at the graveside of the 1916 Leaders during which representatives of a number of different faiths read prayers. The President laid a wreath. A minute’s silence was observed, followed by the sounding of The Last Post and the National Anthem.

The full text of Dr Jackson’s sermon can be found here.