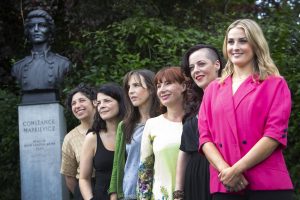 Minister for Culture, Heritage and the Gaeltacht Josepha Madigan TD, announced the first recipients of the Markievicz Award, a new bursary scheme for artists, so-called to commemorate the 100th anniversary of the appointment of the first female cabinet minister, Constance de Markievicz.

The Award Scheme is an initiative of Minister Madigan under the Decade of Centenaries 2012-2023.  The Arts Council oversaw administration of the award scheme and received a total of 107 applications under the scheme earlier this year.  The award winners announced today by the Minister are Sibéal Davitt, Isadora Epstein, Claire Kilroy, Louise Lowe and a collective of poets which include Annemarie Ní Churreáin, Kimberley Campanello and Dimitra Xidoous.

The bursary scheme both honours Countess Constance de Markievicz – herself an artist – and provides support for artists from all backgrounds and genres in producing new work that reflects on the role of women in the period covered by the centenary commemorations and beyond.  The Arts Council provided robust support to the Department in developing the scheme and delivered the Awards in a very professional and timely manner, and was an invaluable partner in the process.

At today’s announcement Minister Madigan remarked that “Only 113 women have been elected to the Dáil since de Markievicz achieved that milestone in 1918 and just 19 of them have been appointed to cabinet over the last 100 years, myself included in 2017!”

The Minister added “de Markievicz was an iconic pioneer, but just one of many formidable women of her era whose stories are still being revealed to us.  Even following our most recent trip to the polls in May and the slight improvement in female representation on our local authorities, the theme of these bursaries serve as a further reminder that we still have a way to travel on the road to full equality in Irish political life.”

Future awards will be made each year to up to five artists or writers (either individual artists working alone or in collaboration with others) to a value of €20,000 per individual or group.

The Department of Culture, Heritage and the Gaeltacht will continue to partner with the Arts Council on the governance arrangements and the administration of the scheme and it will open for submissions again early in 2020 with the next round of bursaries to be awarded in May 2020.  The scheme will be open via a public call to artists working in all genres supported by the Arts Council.

Where there are applications of a sufficient standard, one of the bursaries each year will be awarded to an artist working in the Gaeltacht and through the medium of the Irish language.

Applications from individuals or groups within culturally diverse communities and artists with disabilities will continue to be strongly encouraged.

The announcement was made in St. Stephen’s Green Park at the limestone bust of Constance de Markievicz. 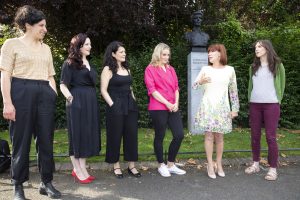 S)worn State(S) – Poems after Countess Constance Markievicz is a collaborative project by three of Ireland’s most exciting new literary voices – Annemarie Ní Churreáin, Kimberly Campanello and Dimitra Xidous. Taking the theme of ‘witness’ in the context of women’s lives and the Irish State 2012-23 and beyond, this project will result in a suite of new poems and culminate in a live performance & a letter-press publication by The Salvage Press.

Sibéal Davitt – award winning dance artist, performer and teacher from Dublin.  Her style of dance is influenced by contemporary, classical and Irish traditional ‘sean-nós’ dance, having trained in all styles from an early age. She will create two works: ‘Minseach’ , a full length dance work about the Irish language and  ‘Leanaimis’, focusing on the relationship between four women.

Isadora Epstein – writer and performer based in Dublin whose work hosts a conversation between visual art and performance – is researching the Dun Emer Guild, a collective of Irish women artists founded in 1902 and exploring collaborations of women artists in the past, to reflect on the role of contemporary women artists.

Previously, her work was selected for 2017 Pallas Periodical Review #7 and received the Judge’s Choice Award for her Dublin Fringe 2016 production, Very Rich Hours at Temple Bar Gallery + Studios and her production Flemish Proverbs received the Best Design Award in 2015, also for Dublin Fringe.

Dubliner, Louise Lowe, is one of Ireland’s most innovative theatremakers. Centring around a 16 week intensive investigation with three of the top female historians in Ireland, she will explore how, during the War of Independence and Civil War, women’s bodies became battlefields and how her practice can be propelled at this critical time.

Claire Kilroy –  writer, living in Dublin – will take her fifth novel, Darling, to a final draft in time for a 2021 publication.  She seeks to portray motherhood and infanthood “as truthfully as I am able.”  She won the Rooney Prize for Irish Literature for her début novel in 2004 and her most recent novels have been published to critical acclaim.