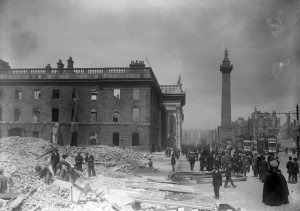 January 2016 saw the launch of a new virtual tour of Dublin in 1916, based on Google Street View, developed by Google in collaboration with (amongst others) Glasnevin Trust, the National Libary and Trinity College Dublin, and narrated by Colin Farrell. This is, however, simply the latest in a wide range of online open access resources being developed for the centenary of the Easter Rising, so here is a brief round-up of some of the other resources available to make sense of the Rising and the Ireland of 1916 in the first half of 2016.

First up are the major official websites: Ireland 2016 details the full centenary programme, while Century Ireland will augment its ongoing coverage with a dedicated online exhibit on the Rising, which will be launched soon. Mention should be made here of the extensive exhibitions relating to the Easter Rising available now from Google Cultural Institute. The National Library of Ireland has an online exhibition on the Rising, but as part of its centenary programme has recently digitised the papers belonging to some of the leaders of the Rising, such as Thomas Clarke, Eamonn Ceannt and James Connolly: these are available to view through the NLI catalogue.

The Digital Repository of Ireland (DRI), as part of its Inspiring Ireland 1916 programme, is developing a new series of multi-media exhibits on the Easter Rising: the first, on ‘Women and the Rising’, is now online.

A quirkier take on the material culture of the Rising is provided by The cricket bat that died for Ireland, developed by Brenda Malone of the National Museum of Ireland. The experience of members of organisations such as the Irish Volunteers, Irish Citizen Army and Cumann na mBan are revealed in the testimonies collected by the Bureau of Military History, and the extensive files of the Military Service (1916-23) Pensions Collection. The ongoing Letters of 1916 project offers access to a wide range of civilian testimonies relating to 1916 as a whole (not just the Rising). Stories from 1916 is a private initiative that also offers access to a wide range of material on the Rising.

RTÉ has developed a major multimedia programme for the centenary, while its archives contain a great deal of relevent material, including interviews with veterans of the Rising. UCC and The Irish Examiner have also developed a new online project, The Irish Revolution, while The Irish Times has developed its own dedicated 1916 website.

TCD’s Decade of Commemoration website contains a wide range of resources (including the dedicated 1916 blog, Changed Utterly), as does UCD’s own Decade of Centenaries site. Both institutions have links to 1916: TCD as a venue used by British troops in the suppression of the Rising, UCD as the alma mater and employers of some of those who fought in it. Some other venues and locations associated with the Rising now have dedicated websites that can be used to explore their role in the Rising: Richmond Barracks, Jacob’s Factory (developed by DIT) and Mount Street (developed by Maynooth University). Glasnevin Trust have also developed a 1916 Necrology as a means of understanding the human cost of the Rising. Northern Ireland’s official Creative Centenaries project also includes some striking material; not least this graphic novel on the Easter Rising.

The Easter Rising was not the only event of note in 1916, as noted in this review from The Economist of Keith Jeffrey’s new global history of 1916 (Jeffrey’s is one of a number of books on 1916 recently reviewed in The Irish Times). BBC Northern Ireland have recently developed Voices 16, telling the story of 1916 as a whole through a wide range of personal testimonies. RTÉ Radio One’s History Show recently hosted a discussion on the other centenaries (not to mention anniversaries in general) that will be marked on 2016: listen back to it here.