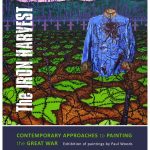 On 9 October 2014 an exhibition by Irish artist Paul Woods opened at Farmleigh to mark the centenary of the First World War. Entitled ‘The Iron harvest’, the exhibition took as its theme the scars and wounds left on the land and on the people in the aftermath of the war. The exhibition followed the trail of the main battles fought on the Western Front—the Marne, the Somme, Ypres and Verdun—and takes a bird’s eye view of the  landscape of the battles. The paintings themselves are in an abstract expressionist style, which bonds well with the original archival photographic imagery upon which they are based. Many of the images sourced for the painting process come from aerial photography and topographical views of the landscape in war.

The ‘Iron harvest’ of the title refers to the annual ‘harvest’ of unexploded ordnance, barbed wire, shrapnel, bullets and congruent trench supports collected by Belgian and French farmers after ploughing their fields. This generally applies to ordnance from World War One, which is still periodically found in large quantities across the former Western Front. The exhibition ran at Farmleigh until 16 November 2014.