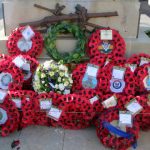 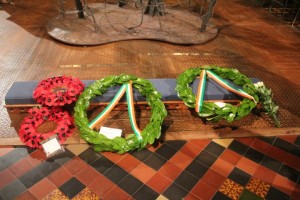 On 9 November 2014—Remembrance Sunday—the Irish government was represented at ceremonies in Belfast, Dublin, Enniskillen and London to commemorate the dead of the First World War. The Minister for Foreign Affairs and Trade, Charles Flanagan TD, attended the ceremony at the cenotaph at Belfast City Hall; An Taoiseach Enda Kenny TD laid a wreath at the cenotaph in Enniskillen, Co. Fermanagh; An Tánaiste, Joan Burton TD attended the annual memorial service at St Patrick’s Cathedral, Dublin; and the Irish Ambassador to the United Kingdom, Daniel Mulhall, attended the ceremony at the London cenotaph and laid a wreath on behalf of the government; the first time the Irish government had been represented at the London ceremony since 1946.

Speaking prior to the commemorations, Minister Flanagan stated that ‘it is important that one hundred years on from the start of the First World War, we mark the sad loss of men and women from all parts of the island of Ireland, through our participation in these Remembrance Sunday events’.

Watch the RTÉ report on the Irish government’s participation in the Remembrance Sunday services. 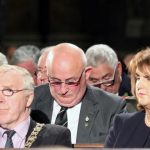 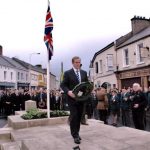 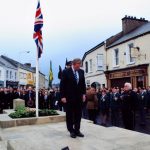 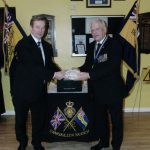 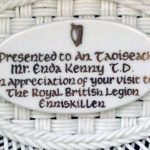 Read Ambassador Daniel Mulhall’s account of the significance of his attendance at the London Cenotaph on Remembrance Sunday. Explore Ireland’s memorial records online, and learn more about the Glasnevin Trust and the Commonwealth War Graves Commission. Read the Irish Times supplement Too much to hope: Ireland’s experience of the ‘war to end all war’, and explore RTÉ’s online centenary exhibition on Ireland and the Great War.