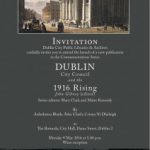 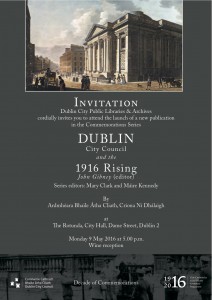 On Monday 9 May Dublin City Hall hosted the launch of Dublin City Council and the 1916 Rising, edited by John Gibney. This is the latest in Dublin City Council’s series of ‘Decade of Commemorations’ publications, and is the first comprehensive look at the effect of the Easter Rising on the municipal authorities. Some fighting occurred in sites belonging to the council, including City Hall itself, while some employees of the council fought in the Rising; other employees were tasked with trying to deal with the aftermath. This collection of essays features an analysis of the political background of the elected council and a full list of council employees who fought in the Easter Rising, along with chapters on the City Hall and Jacob’s garrisons, Dublin Fire Brigade, and a number of individuals, including two of those executed after the Rising.