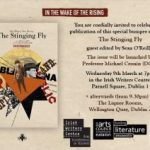 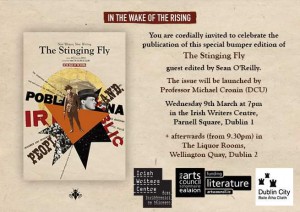 On Wednesday 9 March the Irish Writers Centre, Parnell St, Dublin 1, hosted the launch of the special number 1916 centenary edition of The Stinging Fly, guest edited by Sean O’Reilly, in which 43 writers responded to the background, events and legacy of the Easter Rising. Contributions include essays, memoirs, poems and drama. The magazine was launched by Prof. Michael Cronin (DCU).

Learn more about the 1916 special issue of The Stinging Fly and read contributions by Kevin Barry and Catriona Crowe.