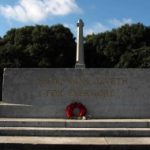 On Saturday 9 July 2016 the main state event to commemorate the centenary of the Battle of the Somme, which is being held in conjunction with the Royal British Legion, took place in the Irish National War Memorial Gardens, Islandbridge, Dublin 8 from 12 noon. The offensive on the Somme, in the Picardy region of northern France, formed the British contribution to a wider allied offensive against German forces in 1916. The battles lasted 141 days, during which British forces suffered 420,000 casualties, making it the most costly military action that they participated in during the First World War; the French suffered 220,000 casualties, while the Germans suffered as many as 500,000 casualties. Approximately 3,500 soldiers from the island of Ireland, serving in the 16th (Irish) and 36th (Ulster) Divisions lost their lives.

The ceremony was held outdoors in the Irish National War Memorial Gardens, Islandbridge.  Invited guests included members of the government, Council of State, elected representatives, members of the diplomatic corps and Judiciary, and representatives of a large number of veterans organisations. It involved a wreath-laying by the President Michael D. Higgins.  Ambassadors of the countries that fought at the Somme and the Presidents of the Royal British Legion (ROI and NI branches) also laid wreaths.  The ceremony was open to the public. Watch the RTÉ coverage of the ceremony and explore  Century Ireland’s online exhibition on the Battle of the Somme.