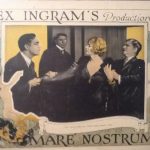 On 9 December 2014 the Irish Film Institute  hosted a special screening of Rex Ingram’s Mare Nostrum (1926), a World War One spy drama starring Ingrams’ wife, Alice Terry. Rex Ingram (1893−1950) was born in Dublin, and is regarded as one of pioneering directors of the silent era. The restored print of the film was presented by arrangement with Photoplay Productions and Warner Bros, and was being shown as part of the IFI’s ‘From the vaults’ strand.

The screening was introduced by Ruth Barton (TCD), author of Rex Ingram: Visionary Director of the Silent Screen, and was accompanied by a live score performed by 3epkano, a Dublin-based collective dedicated to producing original soundtracks for silent and avant-garde cinema. Their score for Mare Nostrum has been created specially for the IFI screening and has been funded by the Trinity College Dublin Visual and Performing Arts Fund.

From Century Ireland: Denis Condon on Irish cinema and the outbreak of World War One.