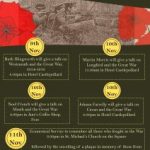 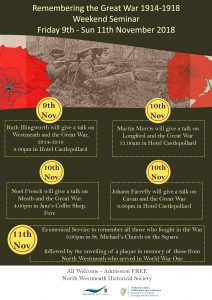 From Friday November 9 to Sunday November 11 North Westmeath Historical Society  presented a series of lectures on the First World War in Westmeath and its neighbouring counties in Castlepollard. There was also be  an ecumenical service at St Michael’s Church, Castlepollard, 3pm on 11 November, with the unveiling of a plaque at  in memory of  those who enlisted in the First World War  from north Westmeath. Admission to all events was free.