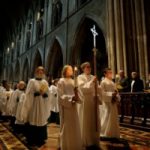 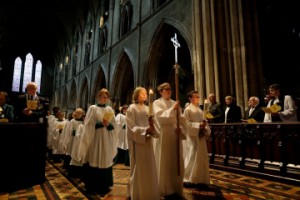 On Sunday 8 November the annual Remembrance Day Service took place in Saint Patrick’s Cathedral. The service was attended by President Michael D. Higgins, and the government was represented by an Tánaiste, Joan Burton TD and the Minister for Arts, Heritage & the Gaeltacht, Heather Humphreys TD. Also in attendence were members of the Oireachtas, Justice Bernard Barton representing the judiciary, members of the Diplomatic Corps, representatives of the Defence Forces, Lord Mayor of Dublin Críona Ní Dhálaigh and GAA President Aogan O’ Fearghail.

The preacher was the Revd Michael Roemmele, formerly Chaplain to H.M. Forces and currently Rector, Camus–Juxta–Bann, Diocese of Derry. Click here to read the text of his sermon. The first lesson was read by H.E. Jean–Pierre Thébault, Ambassador of France, with the second lesson being read by H.E. Dominick Chilcott, Ambassador of the United Kingdom. Wreaths were laid at the War Memorial in the north transept of the Cathedral by President Michael D. Higgins and Col. Ken Martin, president of the Royal British Legion, Republic of Ireland branch, during the service.

An Taoiseach Enda Kenny also represented the government at the annual service in Enniskillen, Co. Fermanagh, where he laid a wreath at the war memorial.

Watch the RTÉ report on the Remembrance Sunday service in St Patrick’s Cathedral.