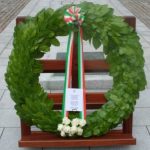 On Sunday 8 July 2018 the principally ceremony of the National Day of Commemoration took place in Dublin. The ceremony is a multi-faith service of prayer and military ceremony commemorating all those Irishmen and Irishwomen who died in past wars or on service with the United Nations. It is held annually on the Sunday closest to 11 July, the date on which, in 1921, the Anglo-Irish Truce was agreed. This years the Dublin event took place in Collins Barracks, Benburb Street, Arran Quay, Dublin 7. Events also took place in Cork and Limerick.

During the main ceremony President Michael D. Higgins laid a wreath on behalf of the people of Ireland. Other invited guests included An Taoiseach, Leo Varadkar TD, members of the government, Council of State, elected representatives, diplomatic corps, judiciary, relatives of 1916 participants and a large number of veterans’ organisations. The ceremony, which was held outdoors, was open to the public.

Learn more about the National Day of Commemoration and watch the RTÉ coverage of the 2018 ceremony.