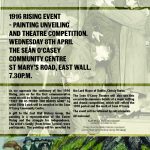 On Tuesday 8 April 2015 Lord Mayor of Dublin, Christy Burke, unveiled a new painting by Eilish Lynch entitled The did us proud: our heroes gone, by artist Eilish Lynch will be unveiled in the Seán O’Casey Community Centre, East Wall, Dublin 3.

A gift to the East Wall History Group, the painting is a representation of the Easter Rising and the struggle for independence. The artist’s family were all participants in the Irish Revolution: her mother and father, Christy and Christina ‘Dina’ Crothers, were both in the Irish Citizen Army while her uncle, Seán ‘Johnny’ Hunter, who lived in Irvine Terrace, East Wall, served in the IRA and died on service with the National Army during the Civil War in 1922.

The Seán O’Casey Theatre also used this occasion to announce details of a major writing and drama competition, which will reflect both the 1916 period and the work of Sean O’Casey.

Click here to read Christy Crothers’ statement to the Bureau of Military History.