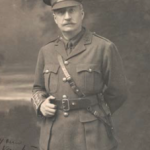 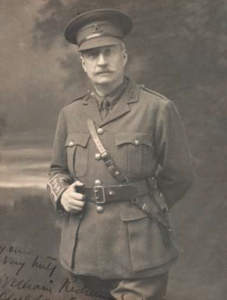 Between Thursday 8 June and Sunday 11 June 2017 Wexford County Council organised a sequence of events to commemorate the death of Major William (Willie) Redmond MP (1861-1917), the younger brother of the Home Rule leader John Redmond, who was killed on the Western Front. Willie Redmond was MP for East Clare, and having briefly served as a lieutenant in the Royal Irish Regiment in 1879-80, he had re-enlisted in the British Army in 1915. The parliamentary seat vacated by his death from wounds on 7 June was subsequently won by Éamon De Valera for Sinn Féin. Redmond had been carried from the battlefield by troops from the 36th (Ulster Division), and is buried near Loker in Belgium.

The principal events were the opening of an exhibition in Wexford Library entitled ‘An extreme Irishman: the life and death of Major Willie Redmond’ on Thursday 8 June, followed by a lecture by Jarlath Glynn (Enniscorthy Library). A seminar on the life of Willie Redmond organised by Wexford Historical Society took place on Saturday 10 June, at Greenacres Art Gallery, Wexford. Speakers include Dermot Meleady, Martin O’Donoghue (NUIG) and Ronan McGreevy (Irish Times). Learn more about the programme and booking details. The final event on the programme took place at 2pm on Sunday 11 June, when the Mayor of Wexford, Councillor Frank Staples and members of Wexford Borough District Council led an Ecumenical ceremony at the Major Willie Redmond Memorial in Redmond Park, Spawell Road, Wexford. The ceremony was preceded by a parade from Redmond Square to Redmond Park led by the New Ross FCA pipe band and a colour party from the Irish Defence Forces.

From UCD Decade of Centenaries: read the Dictionary of Irish Biography entry on Willie Redmond.

From The Irish Times: Ronan McGreevy on Willie Redmond’s letters from the front.