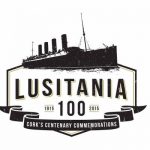 7 May 2015 marked the centenary of the sinking of the Cunard liner Lusitania, which was torpedoed by the German submarine U-20 off the coast of Cork and sank with the loss of 1,198 people. The centenary of the disaster was commemorated with a wide range of events in Co, Cork, including Kinsale. On Friday 8 May, from 11am to 1pm, dramas based on the story of the Lusitania were enacted at Kinsale Community School followed by drama at  Naomh Eltin National School for sixth class primary pupils. That evening, from 7.30 pm to 8.30 pm, a memorial concert was held at Saint Multose Church, which involved a re-enactment of the inquest into the disaster, and the laying of wreaths at the Lusitania graves. At 9pm in the Trident Hotel, the annual conference of the Federation of History Societies began with a keynote speech by Greg Bemis, current owner of the Lusitania. This continued from 10.30am to 1.30pm on Saturday 9 May, and was followed at 2pm by a seminar on the Lusitania and a visit to the Signal Tower at the Old Head of Kinsale. There as also be a street fair at Market Quay at 2pm, organised by the Kinsale Good Food Circle, and a number of exhibitions were held in the town.

Post Views: 74
Posted in 2015 events, Artistic and Cultural, Events in May 2015, Exhibitions, Local Authority Events, Munster, Past, World War One