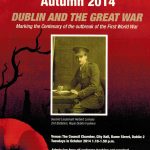 On Tuesday 7 October the Autumn series of Dublin City Hall lunch-time lecture began. The theme of the 2014 series is ‘Dublin and the Great War’. They continued every Tuesday in October. The first lecture on 7 October was given by Tom Burke; the second lecture on 14 October will be given by Seamus O Maitiú; the third lecture on 21 October was given by Ken Kinsella; and the fourth and final lecture, dealing with the songs and poetry of the war, was given by Francis Devine in collaboration with Tom Burke and Alastair Smeaton.

Click here for full details of the lectures and lecturers.

From History Ireland: Padraig Yeates on Dublin during the First World War.