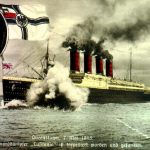 Contemporary German depiction of the attack on the Lusitania

7 May 2015 marked the centenary of the sinking in May 1915 of the Cunard liner Lusitania, which was torpedoed by the German submarine U-20 off the coast of Cork and sank with the loss of 1,198 people. The centenary of the disaster qa commemorated with a wide range of events in Co, Cork. The days events began in Cobh, where the Cunard liner Queen Victoria is scheduled to arrive at 7am. At 10am a special commemorative mass was held in St Colman’s Cathedral, Cobh for relatives of those who died in the tragedy, those involved in the rescue efforts and relatives of survivors. This was followed by an informal gathering in Cobh Parish Centre to sign a special book of remembrance, and the unveiling of glass headstones and a wreath laying ceremony at the graves of Lusitania victims at the Old Church Graveyard

will began at 1pm and was attended by President Michael D. Higgins, who  arrived to a full naval service guard of honour. He was joined by British ambassador Dominick Chilcott, American ambassador Kevin O’Malley, German ambassador Matthias Hopfner, the Chairman of Carnival UK, David Dingle, and Port of Cork chairman John Mullins. The Queen Victoria also participated in the ceremony, which concluded with a wreath-laying by President Higgins and British, German and US Ambassadors at the Lusitania Monument in Cobh Town Square. There were a number of other events in Cobh that day, culminating in a memorial flotilla of work boats, fishing boats and pleasure craft sail from Roche’s Point towards Cobh, re-enacting the rescue efforts and symbolising the return to Cobh on 7 May 1915 of boats filled with victims and survivors. This sailed from Roche’s Point past Cobh’s waterfront promenade to Whitepoint at 9pm.

Each boat was illuminated with

searchlights and white lights. This ‘Procession of Light’ continued onshore as one boat, carrying the Cunard Flag, docked at Kennedy Pier in Cobh to a waiting congregation. The Procession  proceeded through Cobh village, illuminating the Lusitania Monument, to a stage on Cobh’s Promenade for a final commemoration, while the 49 bell carillon of St. Colman’s Cathedral was played by Adrian Gebruers, Cathedral Carillonneur.

In Courtmacsherry there was a commemorative mass at 9.30am in Sacred Heart Church, Courtmacsherry, before the laying of wreaths at 2.10pm—the precise time of the attack on the Lusitania—at the site of its sinking by RNLI Courtmacsherry Lifeboat. 1,201 balloons by local school children each bearing the name of a Lusitania victim, were released by local school children. An official commemoration, in which the Naval Service participated, took place at 2pm on the Old Head of Kinsale, and was attended by Minister Simon Coveney TD. The Old Head is the point from which the Lusitania took her final bearing on 7 May 1915 and is the most prominent accessible point of land to the ship’s final resting place, which is just over eleven miles due south of the Old Head Lighthouse. It was followed at 3pm by the official opening of the Old Head Restored Signal Tower, which has been transformed into a Lusitania Museum exhibiting artefacts recovered from the wreck.

Post Views: 66
Posted in 2015 events, Artistic and Cultural, Events in May 2015, Exhibitions, Ireland and the World, Local Authority Events, Munster, Official Commemoration, Past, World War One