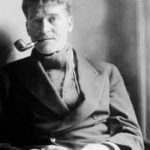 On Thursday 7 May Offaly Historical and Archaeological Society hosted a lecture by Dr Philip McConway entitled ‘Ernie O’Malley’s relationship with Offaly as an IRA GHQ organiser, writer and historian’.

Ernie O’Malley (1897-1957) was born in Castlebar, and having joined the IRA after the Easter Rising of 1916, played a prominent role as an IRA organiser during the War of Independence. He took the anti-Treaty side during the Civil War and wrote a number of acclaimed memoirs: On another man’s wound and The singing flame. During the 1940s and 1950s he conducted extensive research for a projected history of the revolution. O’Malley never completed the project before his death, and his interview notes are retained in UCD Archives.