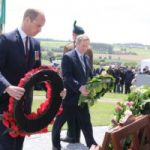 On 7 June 2017 the Island of Ireland Peace Park marks the centenary of the battle of Messines, on the Western Front. This was a preliminary engagement intended to prepare the way for a much wider Allied offensive in and around the Belgian city of Ypres (Ieper) in the summer of 1917; the objective was to capture a strategically important ridge in the vicinity of Messines and Wytschaete. The successful week-long saw one of the largest uses of conventional explosives in history; and was also notable for the hugely symbolic fact that the 16th (Irish) and 36th (Ulster) Divisions, largely composed of, respectively, members of the diametrically opposing Irish National Volunteers and Ulster Volunteers, fought alongside one another in one of the British Army corps that took part in the offensive.

The joint commemoration was led by An Taoiseach Enda Kenny, the Duke of Cambridge and Princess Astrid of Belgium. The Taoiseach first visited the grave of Major William Redmond, M.P., in Locre, before the Duke of Cambridge and Princess Astrid at the Island of Ireland Peace Park for a commemorative ceremony, jointly organised by the Irish and UK Governments, in partnership with the Mayor of Messines. The park is a memorial to the 35,000 Irish war dead. This  event consisted of a wreath laying ceremony, readings by members of the Irish Defence Forces and British Army representatives, as well as musical contributions by the Royal Band of the Belgian Navy. The Taoiseach, the Duke and Princess Astrid laid wreaths at the round tower in the Park before meeting invited guests, including descendants of those who fought at the battle. Wreaths were also laid on behalf of the Australian and German governments. Watch the RTÉ report on the ceremony here.

Read the most recent instalment of The Irish Times ‘Century’ supplements on the Irish experience of the Western Front in the summer of 1917, which is also the subject of this article by Lar Joye, from the latest edition of Century Ireland. The Irish dimension to Messines itself is explored in this video by Ronan McGreevy, who also contributed a short report on Major Willie Redmond (the most famous Irish casualty of Messines) to the RTÉ Radio One History Show. Finally, the experience of the 16th and 36th Division’s fighting alongside each other is dealt with by Tom Burke in this article from History Ireland.

Posted in 2017 events, Events in June 2017, Ireland and the World, Official Commemoration, Past, World War One and tagged Island of Ireland Peace Park, Messines