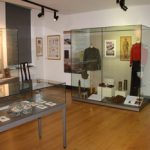 On Saturday 7 June 2014 Down Heritage Network held a one-day conference at the Newry and Mourne Museum, entitled ‘Local impacts of the First World War’. This was related to the ongoing exhibition of the same name currently on display in the museum. The exhibition looks at the issues that affected Newry and Mourne politically, socially and economically during this tumultuous time, as well as examining specific issues such as recruitment and remembrance.Visitors can view a range of artefacts from the period, including embroidered silk postcards, medals and uniforms, with the centrepiece of the exhibition, Newry’s ‘Roll of Honour’. which was the subject of a lecture by Joanne Cummins and Greag McAteer. This document was produced to encourage recruitment to the British armed forces, by emphasising that Newry had seen high levels of enlistment at the outset of war, while at the same time publicly honouring those who had enlisted.

The exhibition, which has been genously supported by donations of material from the locality, illustrates how the First World War affected the lives of hundreds of ordinary people in the area either through recruitment and the experience of war, along with bereavement and loss. It runs until May 2015.

To learn more about Newry and Mourne Museum, click here.