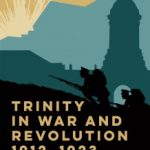 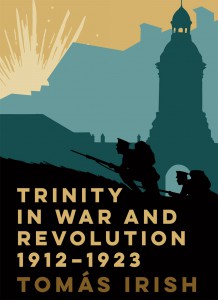 On Monday 7 December 2015 Chief Justice Susan Denham launched Trinity in war and revolution, 1912-1923, by Tomás Irish, lecturer in Modern History at Swansea University. The book, published by the Royal Irish Academy, tells the story of how TCD was involved in, and affected by, the Irish revolution of 1912-1923. Thousands of Trinity students and graduates fought, and almost five hundred died, in military service during the Great War and its aftermath. Trinity was also an important site of armed conflict during the 1916 Rising. Trinity’s complex role in the period is eloquently symbolised in the fact that two of the defining figures of the two Irelands which emerged in 1921, Edward Carson and Éamon de Valera, were Trinity men.

Speaking prior to the launch, Dr. Irish observed that ‘Trinity, traditionally a unionist institution, went from a position of great prestige and influence at the end of the nineteenth century to having this position challenged by the cumulative impact of the Great War, the Easter Rising, and establishment of the Free State. The institution showed its resilience in the decades that followed and adapted itself to Ireland’s new political arrangements, ultimately re-claiming a position at the centre of Irish life’.

Members of the Dublin University Officers Training Corps in Front Square, c. 1910. (The Board of Trinity College Dublin).

The book details a wide range of stories relating to the men and women  of the Trinity community. For example, in 1912, a student protest was central to the defeat of a ill-advised attempt to exclude Trinity from Home Rule legislation. Two years later, the Provost, J.P. Mahaffy, forbade ‘a man called Pearse’ from speaking to the university’s Gaelic Society on account of his anti-First World War agitation. In 1916, the campus itself was occupied by troops and became central to the British suppression of the Easter Rising.