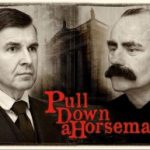 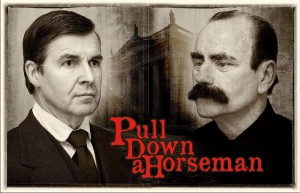 Each Sunday throughout February the National Museum of Ireland (Decorative Arts and History) hosted performances of Eugene McCabe’s one-act play Pull Down a Horseman: the secret meeting that agreed the date for the Easter Rising. Originally written to mark the fiftieth anniversary of the Easter Rising in 1966, the play is based on actual events and dramatises the secret meeting between James Connolly, Patrick Pearse and other republican leaders that took place in January 1916. Having been ‘invited’ to the meeting, the outcome was that Connolly joined the Irish Republican Brotherhood, committed his Irish Citizen Army to join with the Irish Volunteers and finally, fixed a date for what became the Easter Rising.

Performance for adult audiences took place in Collins Barracks on Sunday 7, 14, 21 and 28 February 2016, from 3pm-3.45pm.  Each performance was followed by a discussion drawing on the contextual environment provided by the centenary year of the Rising. The play was directed by Conor O’Malley and is presented by Dublin Lyric Players.

From Century Ireland: read Conor O’Malley’s ‘The secret meeting: setting a date for the Easter Rising’.