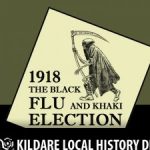 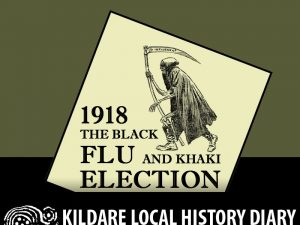 On Saturday 6 October 2018 the 19th Annual Seminar of the County Kildare Federation of Local History Groups took place in the Osprey Hotel, Naas, Co. Kildare, on the subject of ‘The black flu and the khaki election’.The ‘Spanish’ flu pandemic of 1918-19 emerged in the latter months of the First World War, and was transported across the globe as armies demobilised on an unprecedented scale following the end of the conflict. The influenza strain was a particularly virulent form of avian flu that had made the transition to humans, and may have killed as many as 100 million worldwide. In Ireland the pandemic came in three waves in late 1918 and early 1919, causing immense disruption across society as perhaps 800,000 Irish people were infected; over 20,000 died.

The first recorded instance in Co. Kildare was in Athy on 13 July 1918. In Co. Kildare Naas suffered the most, with the flu accounting for just under 25 per cent of all deaths in 1918, while in Athy, just over one in five deaths were due to influenza. Co. Kildare had the highest death rate in 1918 – 3.95 per thousand – a total of 263 deaths. The seminar explored the impact of both the pandemic, and the political upheavals of 1918, on Co. Kildare.

The seminar was opened by Seán Power, Mayor of Kildare, and speakers included Ida Milne and Thomas Nelson. Follow this link for details of the full programme.