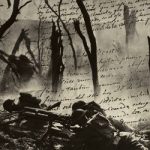 On Wednesday 6 May 2015 The Irish Times published the latest in its series of ‘Century’ special supplements, with the support of the Department of Arts, Heritage and the Gaeltacht. The supplement was entitled Never such innocence again: writers and the First World War. As noted by Patrick Smyth in his introduction, the experience of the Great War ‘was also reflected in new ways of describing the world, writing in a new way, in a new language. The revolutions in social and gender relations, and the national uprisings that this extraordinary decade ushered in were echoed in the world of thinking, art, science, and of writing, both in its content and form’.

The supplement dealt with the manner in which a number of writers, not all of whom were Irish, reacted to the Irish experience of the war; these included Francis Ledwidge, Rudyard Kipling, Patrick Macgill and Erich Maria Remarque. Contributors to the supplement included Gerald Dawe, Fintan O’Toole, and Lara Marlowe.