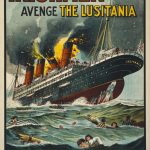 To mark the centenary of the sinking of the Lusitania on 7 May 2015, on 6 May 2015 University College Cork  hosted a conference entitled ‘The Lusitania and the war at sea’, which examined the Lusitania disaster and its impact against the backdrop of maritime warfare in the First World War. Speakers  included Gabriel Doherty (UCC), Bryce Evans (Liverpool Hope University), and Duncan Redford (National Museum of the Royal Navy).

From the International Encyclopedia of the First World War: The sinking of the Lusitania.