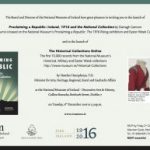 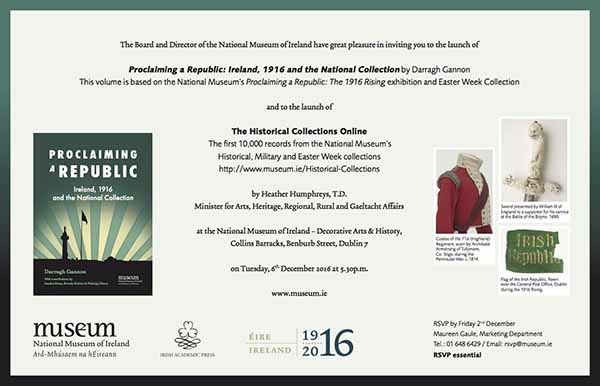 On 6 December 2016, the National Museum of Ireland launched online a sample of 10,000 records covering a range of topics and object types from this period, from uniforms, flags, letters, photographs and firearms to the personal relics of the Irish men and women who fought for an independent Ireland. The historical collections at the National Museum of Ireland tell the military and political history of the Irish, both at home and abroad, from the 16th to the 20th centuries. In total there are 36,000 objects in these collections. The majority of these objects have never been on public display, and many cannot be displayed in a gallery due to preservation concerns. They will be presented here for the first time to coincide with the centenary of the 1916 Rising and the Decade of Commemorations.

The online collections were launched by Heather Humphreys TD, Minister for Arts, Heritage, Regional, Rural and Gaeltacht Affairs at 6pm in the National Museum of Ireland – Decorative Arts and History, Collins Barracks, Dublin 7. The event also incorporated the launch of Darragh Gannon’s Proclaiming a Republic: Ireland, 1916 and the National Collection, based on the major exhibition of the same name.