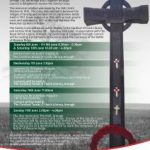 From 6-10 June 2017 a series of lectures were delivered in the Cardinal Tomás Ó Fiaich Library and Archive, Moy Road, Armagh, on the Battle of Messines and on the local and social impact of the First World War In addition, the library hosted the Ginchy Cross throughout this period This cross was carved in 1916 from the wooden beam of a bomb-damaged building by soldiers of the 16th (Irish) Division and originally erected on the Somme, after they had played an important part in capturing the towns of Guillemot and Ginchy where they had lost 224 officers and 4,090 men. The Ginchy Cross was moved to Dublin following the end of hostilities. The cross was also  on public display during a service of commemoration of the centenary of the battle of Messines-Wytschaete organised by the Royal British Legion, which will take place at the Armagh War Memorial, The Mall, Armagh at 4pm on Sunday 11 June 2017. The service was jointly led by Archbishop Eamon Martin and Archbishop Richard Clarke, the Roman Catholic and Church of Ireland Archbishops of Armagh and Primates of All Ireland respectively, and was attended by Heather Humphreys TD, Minister for Arts, Heritage, Regional, Rural and Gaeltacht Affairs. This was a cross-border, cross-community service to mark the sacrifices made by the 16th (Irish) Division and the 36th (Ulster) Division (comprised largely of respectively, the Irish National Volunteers and the Ulster Volunteers ) who fought side by side  at Messines. The aim was to encourage reconciliation through remembrance between the two communities not only in Armagh but across the island of Ireland. Learn more about the ceremony here.

This was the only Royal British Legion centenary commemoration of Messines on the Ireland of Ireland, and was the keynote event for the Northern Ireland District of the RBL in 2017.

From Century Ireland: Lar Joye on the Irish soldier in Belgium, 1917.