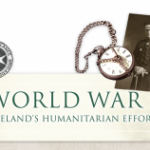 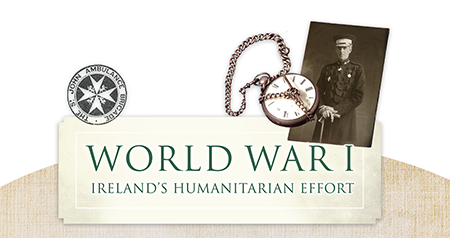 On Thursday 6 September 2018 Josepha Madigan TD, Minister for Culture Heritage and the Gaeltacht, officially launched a new exhibition entitled World War One: Ireland’s humanitarian effort at the dlr Lexicon in Dún Laoghaire. The exhibition explored voluntary humanitarian aid efforts in Ireland during the war, and was curated by Pádraig Allen of the St John Ambulance, who in 2015 established the St John Ambulance Archives after discovering the vast range of material retained in the organisations headquarters on Leeson St, Dublin 2. The archive is a substantial collection of over 3,000 photographs and documents dating back to the start of the organisation’s work in Ireland from 1880 onwards.

The St John Ambulance became Ireland’s de facto national ambulance service during the First World War, and over 6,000 volunteers were active in the organisation nationwide during the war. Given the relative dearth of social provision by the state, voluntary organisations such as the St John Ambulance assumed a greater importance, given the scale of the human suffering caused by the war. The exhibition explores the personal stories of many of the volunteers who, as members of the organisation, sought to alleviate the pain, suffering and deprivation of both combatants and non-combatants alike. It was the largest exhibition held to date on this subject.

The exhibition ran during opening hours at dlr Lexicon until 26 October 2018.

From Dublin City Library and Archive: Listen back to Pádraig Allen on ‘Women of the brigade: St John Ambulance and the First World War.