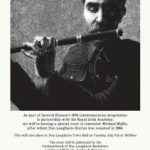 On Tuesday 5 special event was hosted to remember Michael Mallin. one of the executed leaders of the Easter Rising, after whom Dun Laoghaire Station was renamed in 1966. Mallin features in the recent Royal Irish Academy publication 1916: Portraits and Lives, edited by James Quinn and Lawrence White, and illustrated by David Rooney.

The event took place at Dun Laoghaire Town Hall on Tuesday 5 July at 7.30pm as part of Iarnród Éireann’s 1916 commemoration programme, in partnership with the Royal Irish Academy, OPW and Ireland 2016. The event was addressed by the Cathaoirleach of Dun Laoghaire-Rathdown County Council, and Sinead McCoole, author and historian.

From The Irish Examiner: Brian Hughes on the execution of Michael Mallin.