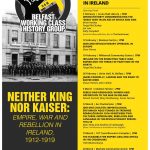 On 5 February 2015 the Belfast working class history group (BWCHG) launched a lecture series entitled Neither King nor Kaiser: empire, war and rebellion in Ireland, 1912-1919. The lecture series is sponsored by Queen’s University Belfast, the Heritage Lottery Foundation, and the Northern Ireland Community Relations Council, and took as its subject contemporary opposition to the First World War in Ireland. The lectures took place in a number of venues in Belfast throughout February and March.

Click here for full details of speakers, topics and venues, and to learn more about the Belfast Working Class History Group.