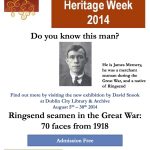 At 6.00pm on Tuesday 5 August Christy Burke, the Lord Mayor of Dublin, launched a new exhibition in Dublin City Library and Archive, 138-144 Pearse Street, Dublin 2, entitled Ringsend seamen in the Great War: 70 faces from 1918. The exhibition was devised and created by David Snook, who will be available in the library every Thursday in August to answer queries on the exhibition. Members of the public with relatives featured in the exhibition are encouraged to bring any family memorabilia to be copied and stored in the Dublin City Archives.

Large numbers of men from the traditional maritime area of Ringsend in south Dublin enlisted in the Royal Navy during the First World War; indeed, a sailor from Ringsend, Joseph Pierce Murphy, was amongst the first Irish victims of the First World War, when he and thirteen other Irish sailors were killed when the cruiser HMS Amphion sank in the North Sea after hitting a mine on 6 August, with the loss of over 150 lives. To mark the centenary, at 6.30pm on 6 August there was a commemorative service in St Patrick’s Church, Ringsend, Dublin, near Pierce Murphy’s home at 2 Thorncastle Place.

To accompany the exhibition, there will be a heritage seminar between 2.00pm and 4.00pm on Saturday 29 August. The exhibition runs until 30 August 2014. 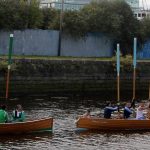 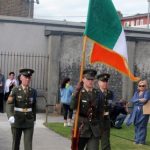 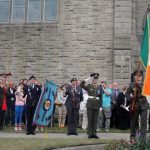 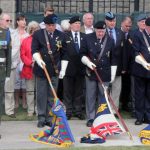 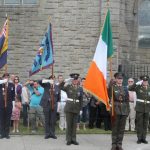 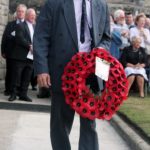 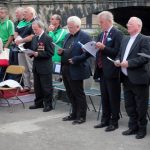 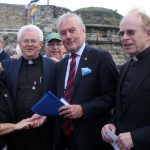 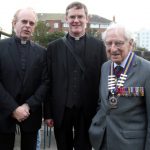 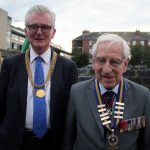