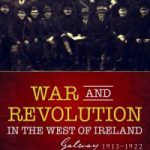 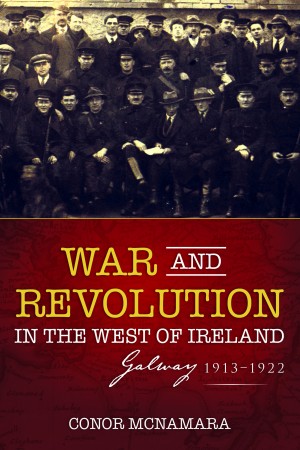 On Thursday 5 April the launch took place in Galway of Conor McNamara’s War and revolution in the west of Ireland: Galway 1913-1922. The book explores the history of the entire revolutionary period in Connaght, with particular focus on  County Galway. The period 1913-22 witnessed extraordinary upheaval in Irish society. The Easter Rising of 1916 facilitated the emergence of new revolutionary forces and the eruption of guerrilla warfare. In Galway and elsewhere in the west, the new realities wrought by World War One and the outbreak of the Easter Rising saw the emergence of a younger generation of impatient revolutionaries, as east Galway was one of the few areas outside Dublin in which fighting took place in 1916. Alongside political upheaval, conflict over land, an enduring grievance of the poor, threatened to overwhelm parts of County Galway with sustained land seizures and cattle drives by the rural population. War and Revolution in the West of Ireland: Galway, 1913-1922 explores  the revolutionary activities of the ordinary men and women who participated in the struggle for independence, and to unravel the complex web of identity and allegiance that characterised the west of Ireland, exploring the enduring legacy of a remarkable and contested era.

The book was launched at 8pm on Thursday 5 April in the Mechanics Institute, 6-8 Middle St, Galway City, by Prof. Daniel Carey (NUIG).

From History Ireland: Conor McNamara on the Easter Rising in Galway.