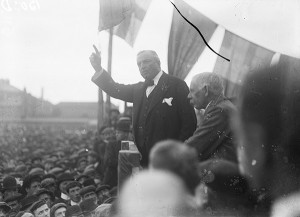 On 4 September 2015 NUI Galway hosted a one-day workshop entitled ‘Researching the Irish Parliamentary Party in the Decade of Centenaries’. The workshop was part of NUI Galway’s commemorative plans for the Decade of Centenaries, and examined opportunities and challenges to researching the Irish Parliamentary Party in the build up to the centenary of the 1916 Rising. Diverse aspects of the party and its following throughout the country were discussed, as was the interaction of the party with the events of 1916 and afterwards, the public memory of John Redmond, and the current state of scholarship relating to the party. Speakers included Conor McNamara (NUIG), Pat McCarthy, and Ciaran Wallace (TCD).