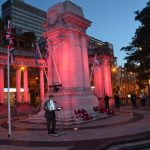 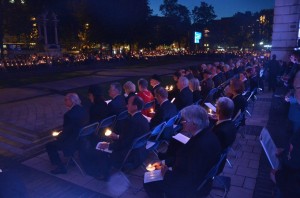 On Monday 4 August 2014 Heather Humphreys TD, the Minister for Arts, Heritage and the Gaeltacht, attended a number of events in both Glasgow and Belfast to mark the centenary of the outbreak of World War One. In the morning Minister Humphreys attended a service at St. Mungo’s Cathedral, Glasgow, before laying a wreath during a service at the Cenotaph in George’s Square, Glasgow. She then attended a civic lunch held at Glasgow City Chambers. Minister Humphreys, who has responsibility for the Decade of Centenaries commemorative programme, participated in the memorial events in Glasgow alongside British Prime Minister David Cameron and Commonwealth representatives. Following the events in Glasgow, Minister Humphreys travelled to Belfast for a number of commemorative ceremonies. She gave a reading at a service of solemn commemoration in St. Anne’s Cathedral before attending a reception at Belfast City Hall. Afterwards she laid a wreath at City Hall in memory of Irish soldiers killed in the First World War before taking part in the vigil ceremony conducted at City Hall.

Speaking in advance of the events, Minister Humphreys said that ‘as relations between the people of these islands continue to evolve, it is only right that we come together to remember those people, from across the two islands, who gave their lives in the Great War.  Whatever their background, those soldiers each made the same ultimate sacrifice.  Bombs and bullets did not discriminate between British or Irish, Catholic or Protestant, Nationalist or Unionist, and they fell side by side in incomprehensible numbers.  Their families and loved ones shared a common bond, as they were left to deal with their terrible losses.  It is fitting that a century later, people of all shades of political opinion and none, can come together in dignity and respect in memory of those brave men’.

Read the full transcript of the address given in St. Anne’s Cathedral by the Most Revd Dr Richard Clarke, Archbishop of Armagh & Primate of All Ireland.

From the British Library’s World War One centenary project: David Stevenson on Europe before 1914 and the origins and outbreak of the war, and Annika Mombauer on the debate over the origins of the First World War.

Explore the RTÉ special report on ‘The world at war’, and RTÉ’s online centenary exhibition on the First World War. 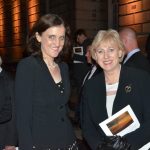 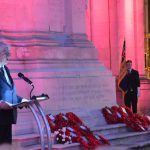