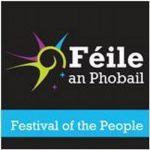 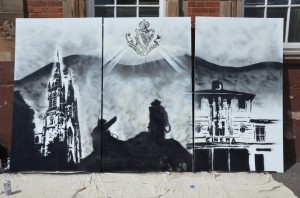 At 1pm on Monday 4 August 2014, as part of Féile an Phobail, an exhibition by the 6th Connaught Rangers Research Project was launched at Falls Road Library, Belfast, entitled ‘Rediscovering the Belfast Nationalists who fought in World War One’. The launch was addressed by Siobhan Brennan Deane of the 6th Connaught Rangers Research Project. The exhibition also incorporated an exterior mural and was accompanied by a series of lectures, the first of which was delivered that evening by Richard Grayson (Goldsmiths, University of London) entitled ‘Remembering, forgetting and commemorating Ireland’s Great War: issues for Belfast’.

The lecture series continued each day throughout the week. Each lecture was preceded by a ten-minute talk by staff from the Public Record Office of Northern Ireland (PRONI) on the individual experiences of soldiers and civilians during the First World War, and showcased some of the archival resources from PRONI. The lectures were chaired by Claire Hackett, director of the cross-community ‘Pieces of the past’ oral history project, and took place in Falls Road Library. The remaining lectures in the series were given by Fearghal McGarry (QUB), Philip Orr, Margaret Ward, Lynda Walker, and Jimmy McDermott.

Learn more about Féile an Phobail and World War One centenary projects in Belfast. 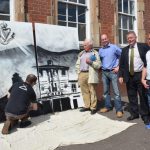 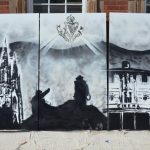 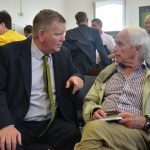 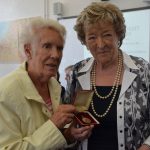