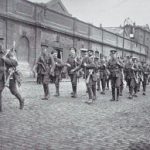 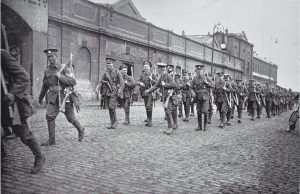 From Sunday 4 November to Saturday 10 November 2018 the National Library of Ireland will be presenting diverse programme of talks, tours, lectures and more to mark the centenary of the 1918 Armistice and the end of the First World War. Beginning with a performance of Michael Holohan’s ‘Gallipoli, the GPO, and Flanders’ on Sunday 4 November, the NLI programme also features a lecture by Tom Burke entitled ‘From shoe box to window box: Commemoration of the First World War in Ireland, 1919 to 2016’, at 7pm on Tuesday 6 November. There will also be a number of pop-up talks in the NLI’s World War Ireland exhibition at 2-3 Kildare St delivered by Maeve Casserly (NLI):  ‘Harry Clarke’s War Memorial Records’ on Wednesday 7 November at 1pm, repeated on Saturday 10 November at 2pm, in the exhibition World War Ireland; ‘WWI recruitment propaganda posters’ on Friday 9 November at 1pm; and  ‘Women and work in WWI’ on Saturday 10 November at 12pm.

NLI Director Dr Sandra Collins noted that ‘The National Library has been proud to play a key role in remembering Ireland’s involvement in World War I over the last four years. From organising collecting roadshows for family memorabilia, to staging exhibitions and events for more than 200,000 visitors, we engaged with audiences from families and young children to active retirement groups, and partnered with organisations around the country and internationally to share our rich resources. As we approach the centenary of the Armistice, we have put together a varied programme of free events to offer insight into this period of history. I encourage everyone to take this opportunity to visit our World War Ireland exhibition, which illustrates the Irish experience of the four years of war in a nuanced and vivid way, through the Library’s holding of personal letters, diaries, newspaper reports, cartoons, and leaflets. Our pop-up talks will take place in this exhibition and there will also be free guided tours in Irish and English as part of the programme, and free copies of our history-based comic books co-produced with Nerve Centre in Northern Ireland’.