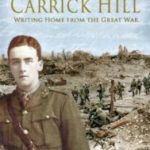 On Wednesday 31 May 2017 the National Library of Ireland, Kildare Street, Dublin 2 presented an event based on Tom Burke’s (UCD/Royal Dublin Fusiliers Association) book  Messines to Carrick Hill: Writing home from the Great War. Set against the backdrop of the prelude to Battle of Wijtschate-Messines Ridge on 7 June 1917, the book and the event focused upon the letters of 2nd Lieut. Michael Wall of the 6th Royal Irish Regiment, written from Flanders to his mother in Carrick Hill (Portmarnock, Co. Dublin). There were readings of the letters by actors, accompanied by a pictorial presentation by Tom Burke on Michael’s trench life in the months before the battle.

From History Ireland: Tom Burke on the Battle of Wijtschate-Messines Ridge.

Post Views: 286
Posted in 2017 events, Dublin, Events in May 2017, Ireland and the World, National Library, Past, World War One and tagged Messines, national library, Tom Burke